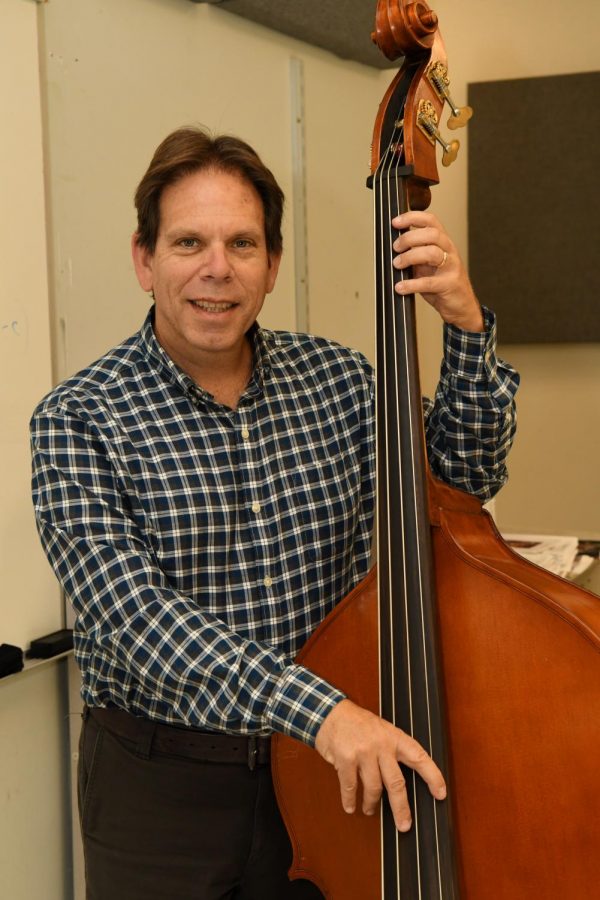 As an extremely accomplished teacher, instructing at various academic levels for 35 years, Dr. Frank Hansen started his path to music envisioning himself solely as a musician.

“I started as a professional musician when I was fourteen, playing music since I was 5. In fact, I really didn’t go to school to become a music teacher. In college, I got a performance and composition degree, with a doctorate in music history,” said Hansen.

Hansen’s interest in music started at a very young age through various inspirations.

“First of all, my parents weren’t musically inclined, but my neighbor was. My next door neighbor was a professional saxophone player. So, I started on the saxophone at an early age, with him and his son. We were always playing; we played duets all the time. Also, I remember seeing the movie, the Glenn Miller story on TV. Before that, I wanted to be Thurman Munson, the catcher for the New York Yankees. But, once I saw the movie, I [realized] that’s what I wanted to do. I thought that was the coolest thing,” said Hansen.

Driven by his desire to become a musician, he pursued musical education in college.

Simultaneously, he was introduced to teaching.

“When I was doing my undergraduate work, I was on a scholarship, where part of the plan was that you had to teach. So, I wound up teaching college courses as well as tutoring students. After some time, I thought [teaching] was a lot of fun. I really like helping people. Because of this, [when I came] to New York, [I decided to] play, but then teach. Since then, that’s been my whole philosophy, professional musician first, teacher second,” said Hansen.

With teaching experience at various schools, Hansen received a job offer from Commack.

“I was hired here to build a program. I think, because of my prior experience of building programs at different schools, they wanted me to kind of bring that here to Commack. I started the music theory program and I was one of the founding fathers of IB music,” said Hansen.

With his musician first, teacher second mentality, Hansen’s approach to both music and teaching has given him a unique perspective on instructing his students, treating them like colleagues.

Over the years, Hansen has improved and refined his teaching, learning from experience and other teachers.

“Throughout my career, I’ve taught just about everything. Since I know what it’s like to be in a band, be in a chorus, be in an orchestra, my lens is very wide. I try to find things [each group] has in common, and apply what works in one group to another. In addition, we have an amazing, incredible music staff here. I’ve learned a lot from them about how to teach over the years,” said Hansen.

Becoming a father also helped him develop his teaching style.

“The way I was before I had children, and the way I am now are completely different. After I had children, I had a lot of empathy. I understand that you have a mother and a father and they love you unconditionally. They only want the best for you. As a father, I understand that. So, I try to treat you the way I would treat my own children. I think that’s important,” said Hansen.

Currently, Hansen instructs a handful of groups, composed of four jazz ensembles and the orchestra.

While teaching takes up a large portion of his time, Hansen never forgets his roots as a musician.

“When I’m not teaching, I’m usually doing a Broadway show, movie scene, concert, or I’m playing at a jazz club somewhere. Sometimes, I play in an orchestra somewhere. I do a lot of different types of things,” said Hansen.

Even though his schedule is packed, Hansen doesn’t feel too pressured.

“I just think I really enjoy it. I love wearing many hats. I thought many years ago I was just going to be a musician, but then opportunities came along, with their challenges. A lot of times, I would [take the opportunities], so I think I enjoy the challenge of taking on something that may not be my wheelhouse or my strength. I maybe even thrive on the pressure of taking something that’s not my strength, where other people kind of back away,” said Hansen.

“You know, originally, I had the theory room designed also as a studio, to kind of get involved with film scoring for example. They called it MP&E, music production and engineering. I really would love to see that eventually, I mean, that was my vision,” said Hansen.

“I would eventually like to see us go back to where we have three bands, three orchestras, and three choruses. I would also love to see music technology come back. I think there’s a lot of great opportunities with that. We had a class years ago called jazz improvisation. So, I’ll see as time goes on, hopefully before I leave, maybe we can bring [those classes] back,” said Hansen.

In addition, he would love to see combined ensembles, integrating woodwinds, strings, and percussion.

“I’d love to have a full orchestra, where you have strings, woodwinds, and percussion. There’s so much great repertoire to play. That’s absolutely amazing, and it has so much rich color. It’s just like the crayon box got a whole lot bigger. I would also love to add some strings to the jazz ensemble. I mean, I’ve done it in the past, but I haven’t done it on a consistent basis. It’s just a lot of time. That’s the biggest challenge with all that. It’s not that I don’t want to do it, it’s just [hard to maintain] the balance,” said Hansen.

Hansen has a message to all of his students: